CPA Smartlinks - How To Maximize Your ROI No Matter Your Traffic

In recent years with the rise of big data and the power of algorithms, a new form of affiliate links has emerged in the space, known as a CPA Smartlink.

If you're currently running an affiliate marketing campaign where you're struggling to monetize a portion of your traffic, Smartlinks may be the answer.

What are Smartlink's? Smartlinks are a particular type of link used in affiliate marketing which uses an algorithm to rank offers on performance based on KPIs such as geo, device, operating system, & connection type. The goal of using Smartlinks is to generate more revenue by sending each visitor to the offer that historically best performed the best and is most likely to result in a conversion.

Unlike traditional affiliate marketing campaigns that rely on manual campaign optimization through data collection with tools such as a click tracker, Smartlinks will automatically optimize your traffic on a per-click basis.

Want To Take Your Business To The Next Level?  Join My Private Mastermind 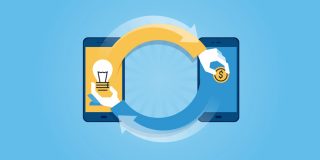 Benefits of Using A CPA Smartlink

As already mentioned, Smartlinks will attempt to optimize ever visitor the best it can. This means you can send all of your traffic to a single link, without having to create multiple campaigns.

Using a Smartlink can save you time by allowing you to test and launch new campaigns quickly. While also allowing you to easily access some of the best-converting offers and landing pages for your traffic.

Smartlinks are a great way to get your feet wet when you're brand new to CPA affiliate marketing by allowing you to only focus on the traffic acquisition portion of running a campaign.

Disadvantages of Using A CPA Smartlink

At this point, you may be wondering why someone would ever run anything other than a Smartlink. While Smartlinks is a great way to monetize low-cost traffic, there are some downfalls.

Most offers and landing page combos that can be found using a Smartlinks often have a much lower payout than if you were to run the campaign directly. Due to you having no control over how your Smartlink optimizes your traffic, it makes it tough to monitor the quality of traffic you send. Affiliate networks know this, and because of it, lower the payouts.

One of the primary disadvantages of running traffic to a Smartlink is getting campaigns approved. A Smartlink's primary job is to generate the most earnings per click (EPC) for every visitor sent to it, which often results in a lot of the landing page and offers combos within the Smartlink to be extremely aggressive. Even if a Smartlink doesn't have aggressive combinations in its rotation, it's almost impossible to be sure every landing page and offer meets the ad quality guidelines of most traffic sources.

What Are The Best Way To Use Smartlinks?

The most common way to benefit from using a Smartlink is to redirect all of your remnant traffic.

What this means is any unintended traffic that a traffic source may sell to you.

For example If you're running traffic to an offer that only converts from US iPhone visitors, any traffic that doesn't match these criteria will never convert on your offer. Instead of sending any traffic that doesn't match these metrics to your primary offer, you can send the traffic to a Smartlink campaign, which will attempt to maximize your profits. No matter which Geo + Device combo the traffic is, the Smartlink will automatically determine the best offer to show to those visitors.

While most affiliate offers, require very specific traffic to result in a conversion with the use of direct links, Smartlinks do not.

Testing out new affiliate offers may seem tedious because they require you to set up a new campaign for each offer you'd like to test.

With the use of a CPA Smartlink, you can instead purchase run of the network (RON) traffic and send it all directly to a Smartlink campaign. Which will allow you to find various combinations of KPIs that are converting, that you otherwise may have been unaware of? After getting some conversion data from running the Smartlink, make your optimizations as normal.